Taking a trip in the way-back machine, when The Woodward Spine was in its infancy stages, Jeff and I agreed that it would be a good idea to solicit posts from upstanding citizens outside of our two-person circle. Enter our first such contributor to (barely, but nonetheless) pass our rigorous tests of skill and humanity: Patrick Smith. Check out his bio on our contributors page for a bit more information on this Royal Oak, Mich.-native-turned-Chicagoan.

Detroiters are known for having particularly thin skin when it comes to national attention being focused on our city; layers of our epidermis have been worn away by decades of criticism. It’s hard to take a joke when the most heartbreaking parts of our struggles are held up for ridicule.

It may be that we are not thin-skinned, but perceptive. Those on the outside looking in seem to discount our successes, minimize our proud history and rejoice in our failures.

So it is with our historically great basketball team, a team two seasons removed from six straight Eastern Conference Finals appearances. National writers are consistently picking the Pistons as one of the four or five worst teams in the NBA, a league that includes the Nets, Warriors, Timberwolves, Wizards, Clippers and 76ers in it.

Beyond that “the Architect,” Joe Dumars, has undergone a precipitous fall from genius to idiot; a stark change in esteem in such a short time that one might conclude the experts don’t have any idea what they are talking about.

Did I miss something? Did those injuries last year not happen? Was that a full team that struggled to 27-55?  If the shocking slate of injuries the Pistons faced last year had befallen any of the handful of teams that The Worldwide Leader chooses to follow, we would be reading sympathetic articles of lament and predictions of resurgence.

This is supposed to be a Pistons preview, not a pissy response to clueless national reporters, but I offer this point as an explanation of why my prediction is so different from those found at more traditional outlets. This Detroit squad has huge holes that need to be filled before it can be considered a contender, but there’s a big gap between worst in the league and those of a championship caliber and this team is a wee-bit closer to the contender end of the spectrum.

That said, here are the five biggest questions for the ’10-11 ‘Stones: 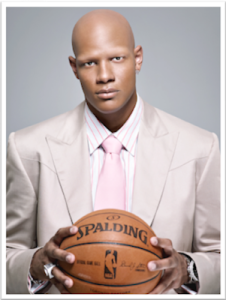 I may have read too many True Blue Pistons articles breathlessly recounting Charlie’s newfound dedication to exercise (seriously dude you’re a pro-athlete, why were you not on this before?), but I’m cautiously optimistic about CV’s upcoming season. If he is able to wrest the starting spot from Jonas Jerebko (Ed. note: Jerebko has since been diagnosed with a torn Achilles tendon; will be out 5-6 months), the team’s problems in the post get a little smaller. 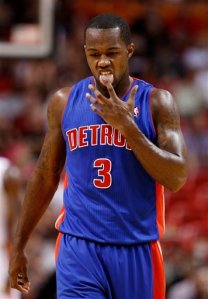 2. Will Rodney Stuckey play like the star the Pistons think he is?

Slightly behind Charlie in importance because there are other guards who can pick up some of the slack, Stuck still needs to have a big season for this team to go anywhere. He says he got quicker and improved his J this summer; I’d settle for improved field goal percentage (better than 50 percent) around the rim. Too many times last year Rodney burned past his guy, muscled his way to the rim and badly missed a lay-up. If he’s going to dominate the ball when he’s on the court, he better learn to finish. 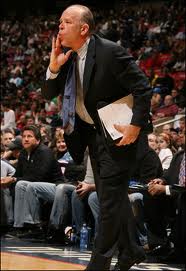 3. Can John Kuester find the best way to use all of the talent on the bench?

With the amount of long, talented, athletic players on the Pistons, they have a chance to present a completely different look to their opponents than they see from any other team. But if Q can’t find the right buttons to push, or retreats into a conventional seven or eight man rotation, the Pistons lose any advantage they have in terms of depth of skill. The only chance the Pistons have is to go big and daring, exhausting teams with an unlimited amount of players and lineup combos. Of course, gambles like that have the potential to be disastrous…

4. Will the competition in practice actually have any impact when it counts?

The idea that high-octane practices and competition for PT makes a team stronger is not unique to the Pistons, and I’m not willing to throw it out completely. But there isn’t competition at the 1, 4 and 5 because of impressive backups but because of questionable starters. Will Bynum is an exciting player, but he’s competing at the PG spot because Stuck isn’t getting it done, not because of his quick feet.

5. How stupid was the Tracy McGrady signing?

My money is on pretty stupid. Financially, there’s no risk, taking a flyer on a guy with a huge upside for the vet’s minimum seems like good business. But T-Mac’s signing was the first inkling I’ve had that Dumars doesn’t have as much as a grand vision as I’d like to think. The first chance to see him in action against Miami was decidedly unimpressive, I’m willing to give him more time, but signing a potential malcontent at a position where you already have way too many players seems Kahn-esque.

Cowardly as it may be, I’m calling a push. Those tough practices wont translate as much as people hope, and Kuester wont quite be up to the task of lineup juggling. But CV will be much improved and Stuckey will emerge. This team is too talented to not improve greatly over last year and while they wont win it, they will compete with the over-valued Bucks and Bulls for the Central.

1 Response to 2010-11 Detroit Pistons Preview: Better than the worst