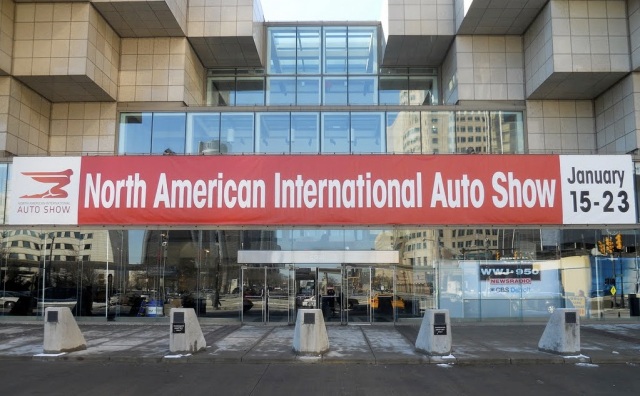 The 2011 North American International Auto Show is officially in the books, which means among many other things that the anticipation for the newly featured cars to hit the streets is bubbling, and that Autorama will soon fill up the Cobo Center floor space. The 2011 show was critical for the domestic automakers, as it was the first real glance into their post-bankruptcy production—and they delivered.

Mike received four tickets from the folks at a local Chevrolet dealership who recently leased him a Malibu, so we took our wonderful girlfriends, Ashley and Emily, out for a Friday night in the city to take in the auto show excitement.

The show seemed to be a bit flashier than the last couple years but still lacks that high energy, exclusive feel of the car companies’ “good ole days.” Still missing are those elite VIP areas that once were positioned above each car maker. Jeep lacked its’ familiar outdoorsy atmosphere complete with a fountain that spells words and a rock climbing wall. Free giveaways were rather scarce, and the displays are dominantly flat and simple. It’s evolved from an awe-inspiring spectacle to just a flashy showroom.

Read our thoughts on this year’s NAIAS after the jump:

– American auto companies are still making noise with the Ford Explorer taking the home the North American Truck of the Year award and the Chevy Volt taking the Car of the Year award. Several new models were showcased with new and improved interiors as well as exteriors. Sales reports have been strong for 2010 and hopefully for the region they continue to climb.

– Chevrolet was a big winner, as they also took home both the 2011 Motor Trend Car and Truck of the Year Awards for the Volt and the Silverado. Chrysler deserves some praise as well for several tweaks to their product line and the addition of Fiat to the domestic market. Only time will tell if the latter is a success, however, the company as a whole finally has steadied itself under the guidance of its new Italian leaders.

– It sort of baffling just how big some of the automobiles we drive have gotten. We understand that some professionals need certain sized vehicles to properly execute their jobs, but does a mother with two kids really need a GMC Yukon XL Denali to lug around the kids to and from soccer and school? Or does dad really need the largest truck model to occasionally carry some drywall or a bike? The sheer amount of space in these vehicles is a little overwhelming.

– While the show seemed to lack any memorable concept cars, it was clear that automakers aimed for substance over style. In a fashion that could be described as a return to the basics, many of the floor-to-ceiling bells, whistles and sideshows that once dotted the exhibits were noticeably absent, as the focus returned squarely onto the cars.

– People go to the show for various reasons—some for the sleek concept cars or to check out the latest technological advancements, while others may use it as an opportunity to shop around for new vehicles. This was one of the strongest in recent memory; not to mention best-attended. It wasn’t as clustered as we remember it as kids (long enough lines to not want to wait), but attendance spiked for a second straight year and also shattered the single-day record from 1993.

– When it comes to identifying where the major players in the automotive sector derive from, the usual suspects still remain: the United States, Germany and Japan. Still, several relatively-unknown Chinese companies use NAIAS as a chance to establish their brand in the Western Hemisphere. Porsche made its’ return this year (absent since 2007). Jeff and Emily tried to check out a Porsche Cayenne but were informed that they needed to keep it closed because the interior was being “destroyed.” (The Cayenne plays an imperative role in a show we started watching, Brad Meltzer’s Decoded.)

– It’s also worth noting that Cobo Center looked about as spry is it could be. The concourses were lined with vendors, new restaurants have been added and across the street, the former Pontchartrain (Detroit Riverside Hotel) sparkled with elaborate sets and massive wraps from Mercedes-Benz and Saab. There weren’t any reports of leaky roofs dropping water or other substances on high-end vehicles. All in all the upgrades and repairs seemed to be coming along very well.  There’s no doubt that Cobo needs to be either expanded or rebuilt to accommodate more space and better parking options, but nonetheless kudos to the officials at the facility.

The Woodward Spine was the brainchild of Michael Fossano and Jeffrey Buck, two Royal Oak, Mich. natives who met nearly 10 years ago while attending the now-defunct George A. Dondero High School. It seemed fitting for the two Wayne State University alums to craft an outlet to help continually refine their writing skills, while also serving as a trusted source of information for the metro Detroit community. The Woodward Spine aims to inform its readers about relevant news and events through creative and informative posts not only by Mike and Jeff, but other upstanding citizens as well who are driven and proficient in these core areas: news, opinion, entertainment, history, sports and development. The Woodward Spine serves the tri-county metro Detroit area, however concentrating mainly on the communities that lie along the Woodward corridor.
View all posts by The Woodward Spine →
This entry was posted in Detroit, Politics, Things To Do and tagged audi, auto show, autos, cars, chevy, chrysler, cobo, cobo hall, denali, denso, detroit, dodge, downtown, downtown Detroit, downtown revival, Food, ford, general motors, gm, gmc, jeep, kid rock, malibu, Michigan, naias, porsche, ram, saab, travel, vw, woodward, yukon. Bookmark the permalink.