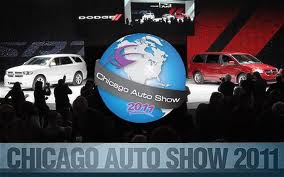 Last Wednesday’s media preview of the 2011 Chicago Auto Show was not only my first time experiencing an auto show preview, but also attending any show outside of Detroit. I came out of it with a new understanding of the business side of the show, along with several ideas on how to improve Detroit’s North American International Auto Show.

Let me first start by saying that all of us Detroiters need to get over the fact that we’re not Chicago, nor will we ever be. Yes, downtown Detroit is on the come-up and is much better now than it was a few years ago. However, the reality is that Wild West-style banditry still exists in the heart of the city—even during periods of heightened security.

It’s no secret that many of the beautifully refurbished downtown hotels are now wracked with vacancies (54.8% occupancy rate for 2010). The hotels cannot sustain from sports and entertainment events alone, they need a thriving convention stream. It’s simple, really—conventions draw people from out of town who will not only stay at hotels, but also spend their money at nearby restaurants, attractions and casinos. The more people that are out and about, the safer the area becomes—provided of course that a police presence is maintained.

The glaring chink in the armor is our beloved Cobo Center. One quick sweep through Chicago’s palatial McCormick Place exposes Cobo for what it is—dirty, bleak and very outdated.

Have you ever tried to explain to somebody how to navigate through the rat’s nest that is the Cobo/Joe Louis Arena corridor? Half of the battle is trying to find a spot to park, but the fun part is the two-mile trek, which may take patrons up a flight of stairs—only to go back down and through a series of twisty, creepy skyways over the Lodge/Jefferson spaghetti bowl.

Our hotel was located in the River North area of Chicago, closer to Navy Pier than the Magnificent Mile, but there were plenty of things to do within walking distance—even with a -20 windchill.

We were shuttled from the hotel to McCormick Place for the 8 a.m. MAMA/Chicago Auto Show Breakfast, which featured a keynote address from Jim Farley, Ford Motor Company’s group vice president, global marketing, sales and service. After his speech, we made our way to the exhibition hall in anticipation of the preview, which featured press conferences from Chevrolet, Hyundai, Volkswagen, Acura, Dodge, RAM, Suzuki and Shelby Cars–many of whom revealed new models.

Take one step into the lobby of McCormick Place and you’ll realize not just the deficiencies of Cobo, but also how dire the immediate need is for an upgrade. Beyond the fact that it’s a newer facility, McCormick is bright, expansive and has a ton of amenities that make it a super attractive option for conventions.

The most striking difference between the two facilities (other than a lack-of the musty, stale hot dog-stench that permeates Cobo) is the amount of floor space. The nation’s largest convention center, McCormick is roughly triple the size of Cobo (2.7M sq. ft. to 600,000 sq. ft.)–a rather obscene and unfair comparison. Nonetheless, automakers have more than enough room in their booths to comfortably spread their wares, and visitors likewise can amble about without feeling too cramped.

At the moment, Cobo clocks in last position in terms of exhibition space among four of the nation’s top auto shows behind Chicago, New York (760,000 sq. ft.) and Los Angeles (720,000 sq. ft.), and is outside of the 20-largest convention centers nationally.

A renovation and expansion of Cobo that utilizes its proximity to the Renaissance Center would not only enhance large shows such as the NAIAS, but it would make Detroit a major player in the convention circuit. Subsequent trade shows and conventions at the venue could generate tens of thousands of jobs and have a huge economic impact for Michigan.