The revolution will be televised

It didn’t take long for the Pistons’ 2010-11 season to fall into near lockstep with last year’s dismal output. There is one major difference, however—this year’s squad cannot lean on the injury crutch like they did last year.

This season has been pockmarked by a handful of events that could be read like Seinfeld episodes. It started with “The Determination Era,” then progressed to “The Tayshaun Feud,” “The Losing Streaks,” “The Unresolved Sale” and “The Rip Benching.”

Just when you thought things couldn’t get any more pathetic, the events that transpired Friday indicated how wayward this franchise really is.

I’m sure that Friday morning arrived just as any other normal one for Kuester, who’s  21-38 team was in Philadelphia to take on the 76ers later. By the end of the morning shootaround, it was as clear to him as it was to everybody else that something had been brewing within his team.

Only seven players showed up for the practice after what is being called a “player protest” of the coach. Kuester dodged many of the questions that were lobbed his way following the practice, which is something that has dogged him all season long.

By refusing to deal with the issues plaguing his team head on, he allowed them to fester through the media and create a toxic locker room. One of the most common complaints from players has been his inability to communicate with them, which is evidenced by the awkward “he-said/she-said” banter during “The Rip Benching.”

Hamilton performed well after he was inexplicably asked to start Feb. 5 at Milwaukee after rotting on the end of the bench for 13 straight games. His subsequent re-benching was the final straw for the players, who had discussed taking a stand against their coach over a week ago, according to Terry Foster of the Detroit News.

At the same time, however, these players are getting paid millions of dollars to be professionals, show up and play a game. For these players to be pulling this stunt in Detroit, with our sour economy on team that’s nearly 20 games below .500 is ridiculous.

Not long after the debacle in Philly, word leaked out through Yahoo! Sports that Hamilton scolded his coach during an expletive-laden tirade just prior to his benching. Assistant coaches were stunned by the outburst, and younger players would later privately confide that they wished they had the courage to step up to Hamilton.

Looking at it through an objective lens, you’d be hard-pressed to disagree with the crux of Hamilton’s argument, which questioned Kuester’s viability as an NBA head coach. The results, or lack thereof, during the supposed offensive mastermind behind the 2008-09 Cleveland Cavaliers speak for themselves. However, Hamilton’s course of action was juvenile and displayed a grossly skewed sense of reality.

Prior to his arrival in Detroit, Hamilton was considered a talented, but one-dimensional shooting guard. Paired with Chauncey Billups, the duo helped to spearhead the Pistons from mediocrity to world championship-caliber basketball for much of the 2000s—even when their defensive deficiencies were exposed once Ben Wallace departed for Chicago. 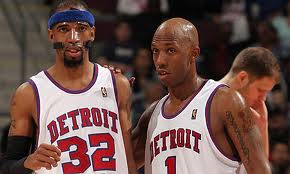 From an offensive standpoint, Hamilton’s game fell off a cliff once Billups was shipped to Denver for Allen Iverson (in retrospect, and perhaps at the time, a trade that should’ve never happened, but I digress…). Even with a rookie head coach in Michael Curry and a transitional roster, Hamilton signed the Pistons’ three-year, $34M extension offer immediately following the trade. Since then, Hamilton has been given space to develop into a relative malcontent with zero repercussions for his detrimental behavior and lack of production—other than reasonable requests for him to come off the bench.

It’s time for Joe Dumars to show some culpability for this disaster as well. When things were great, Dumars was easy to find and had a much stronger media presence. Nowadays, the only time you see him is when the in-game camera picks him out from the depths of his shadowy suite.

Firing Kuester right now would continue what has been an awful run of Piston players running coaches out of town, but it’s likely an inevitable end to this relationship. As he rightfully received credit for culling the pieces to their 2004 championship run, he deserves criticism for a string of questionable free agent signings and draft picks since then.

Dumars needs to regain control of the team by either working behind the scenes to dissolve infighting, or by taking the reins from Kuester as head coach himself. If neither happen, Piston fans can expect this turbulent period to continue.