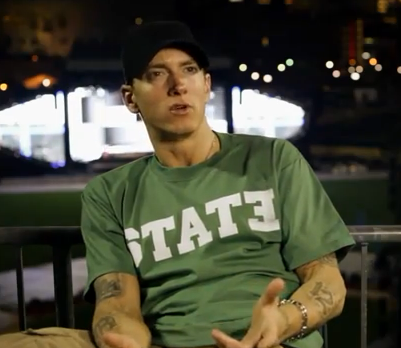 A new video has emerged featuring Eminem with a focus on this past summer’s “Home & Home” concerts that were held at Comerica Park and the “Recovery” of Detroit.

According to local news outlets it’s unclear as to who released or produced the video when it was first discovered but speculation, due to the high quality of the footage and professionalism, is that it was produced by Eminem. It was then confirmed later by Eminem’s spokesperson that it is in fact a teaser for a DVD that will be released. Exciting news if you’re an Eminem or Jay-Z fan.

I'm currently a Project Manager at Cypress Partners, LLC in Bloomfield Hills, Mich. I graduated from Wayne State University in 2008 with a B.A. in Journalism. Looking to broaden my view of the world, I spent a semester abroad studying at the University of Salford, a Greater Manchester University in England. I enjoy doing an array of activities, including following Detroit sports teams, SCUBA diving, traveling, reading, playing tennis, hand-written letters and going to the movies. I am the co-founder of the Woodward Spine, a blog about Detroit and its surrounding communities. The Woodward Spine aims to inform its readers about relevant news and events through creative and informative posts in these core areas: news, opinion, entertainment, history, sports and development. The Woodward Spine serves the tri-county metro Detroit area, concentrating mainly on the communities that lie along the Woodward corridor.
View all posts by Jeffrey S. Buck →
This entry was posted in Detroit, Music, TV/Film and tagged comerica park, detroit, detroit tigers, dvd, eminem, home &home tour, jay-z, Michigan. Bookmark the permalink.