It sat crumbling for years, an eyesore to the area that needed help but cased opposition whether or not it was still needed at all.

According to the site marker the population in Oakland County increased significantly during the 1950’s which in turn made the intersection at 8 Mile Road and Woodward Avenue one of the most congested crossings in Michigan. This new traffic forced leaders to find a way to make the flow quicker and consistent.

The tri-level intersection, while not nearly congested as it was back then, made news once again because of the state of disrepair it was in. Concrete was falling, lanes were littered with potholes, railings were missing and lights no longer worked. It needed an update badly but some contested that the area no longer needed the tri-level intersection and that it would be cheaper and easier to raze the top half of the bridge transforming it into a bi-level.

Ultimately the decision was made to keep the same configuration but give it a much needed face lift and reconstruction. New landscaping, railings and historic look street lamps compliment the area much better and make the intersection an asset to that particular area. No longer an eyesore to the communities it services the intersection plays homage to the history of both throughways.

A unique addition to the intersection was the placement of several period photos of automobiles traveling across Woodward and 8 Mile. These oversized black and white silvery photos add a new element to an already historic structure. When I first saw these after the completion of the renovation I thought for sure that it was only a matter of time before one of these photos or any part of the bridge for that matter would fall victim to vandalism.  Luckily I was proven wrong and thus far the photos have hung unharmed and are enjoyed by many.

Below are a few photographs of a couple of the photos that are on display: 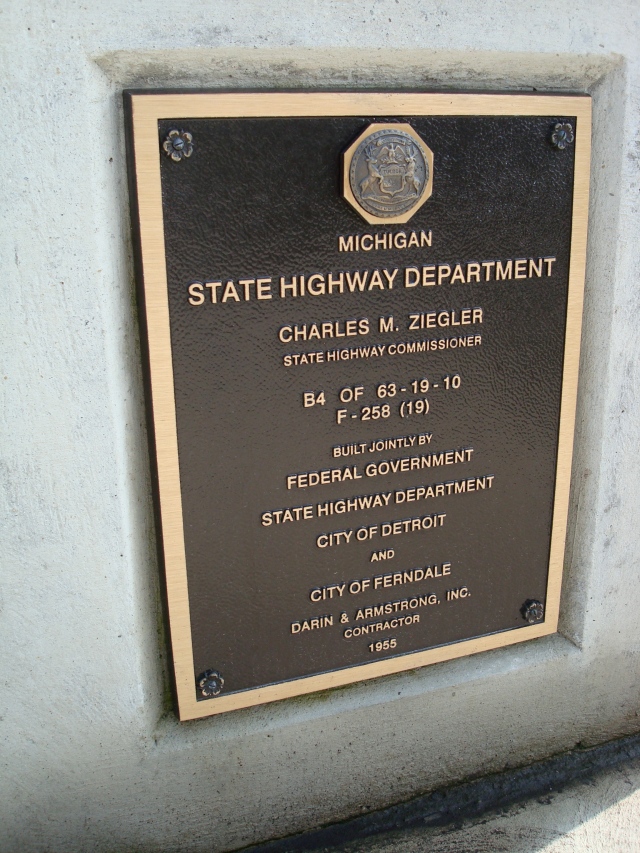 I’m very impressed with how this project turned out because of how much it makes the area around it look even better. While we still wait for the fate of the Gateway Project located on the southwest corner of the intersection we can only hope that it eventually clears all hurdles. A shopping center would help in the transformation of that entire area of both Detroit and Ferndale.

I'm currently a Project Manager at Cypress Partners, LLC in Bloomfield Hills, Mich. I graduated from Wayne State University in 2008 with a B.A. in Journalism. Looking to broaden my view of the world, I spent a semester abroad studying at the University of Salford, a Greater Manchester University in England. I enjoy doing an array of activities, including following Detroit sports teams, SCUBA diving, traveling, reading, playing tennis, hand-written letters and going to the movies. I am the co-founder of the Woodward Spine, a blog about Detroit and its surrounding communities. The Woodward Spine aims to inform its readers about relevant news and events through creative and informative posts in these core areas: news, opinion, entertainment, history, sports and development. The Woodward Spine serves the tri-county metro Detroit area, concentrating mainly on the communities that lie along the Woodward corridor.
View all posts by Jeffrey S. Buck →
This entry was posted in Detroit and tagged 8 mile, automobiles, bridge, cars, detroit, eight mile, Ferndale, ford, historic, Michigan, Oakland County, throughways, tri-level intersection, vandalism, woodward. Bookmark the permalink.