The Hotel Tuller in the background met the wrecking ball, as did the church next door when the hotel expanded during its heyday. I assume during this time there was a high demand for such tours of the city. It would be great if Detroit had such tours today but I assume the demand and costs don’t equal. Make note of the great brick road which today would be the semi circle around Grand Circus Park. What a great time to be living in Detroit.

Take a look at the photograph entitled “Tourist Auto Co.: 1910“:

Here is the same area today: 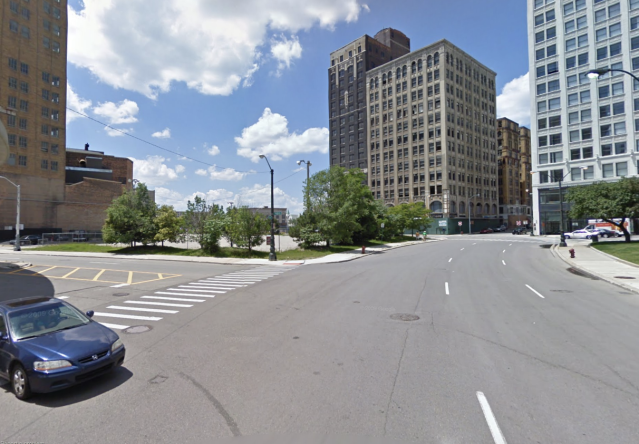 It’s sort of ironic that the car in the street shot is a Honda. Grand Circus has and is seeing a sort of rejuvenation but it would be much more grander had we not lost the Hotel Tuller and Statler Hotel to the wrecking ball.

I'm currently a Project Manager at Cypress Partners, LLC in Bloomfield Hills, Mich. I graduated from Wayne State University in 2008 with a B.A. in Journalism. Looking to broaden my view of the world, I spent a semester abroad studying at the University of Salford, a Greater Manchester University in England. I enjoy doing an array of activities, including following Detroit sports teams, SCUBA diving, traveling, reading, playing tennis, hand-written letters and going to the movies. I am the co-founder of the Woodward Spine, a blog about Detroit and its surrounding communities. The Woodward Spine aims to inform its readers about relevant news and events through creative and informative posts in these core areas: news, opinion, entertainment, history, sports and development. The Woodward Spine serves the tri-county metro Detroit area, concentrating mainly on the communities that lie along the Woodward corridor.
View all posts by Jeffrey S. Buck →
This entry was posted in Detroit, Shorpy Saturday and tagged 1910, church, detroit, hotel tuller, shorpy, statler hotel, tourist auto co. Bookmark the permalink.