This past Saturday’s Shorpy photo shed light on the magnificent Dime building. This past Tuesday real estate sources are reporting that Dan Gilbert has added it to his growing list of Detroit property. Per the Detroit Free Press: 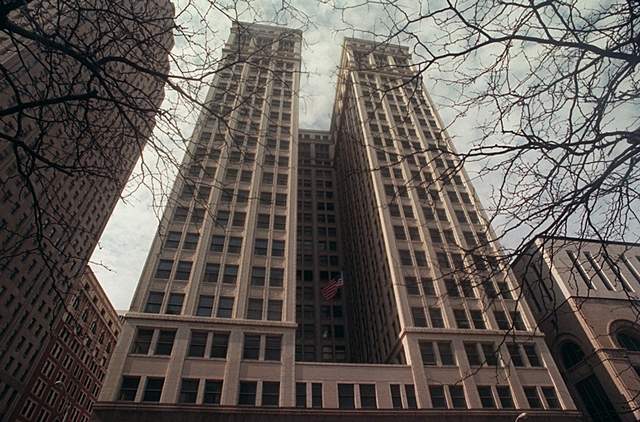 Quicken Loans founder and chairman Dan Gilbert and his partners have placed yet another downtown skyscraper under contract to purchase – the 1910-era Dime Building on Griswold near Campus Martius, real estate sources confirmed today.

Purchasing the Dime Building at 719 Griswold gives Gilbert control of the Chase Building, First National Building, Madison Theatre Building, and soon the Dime, as well as space that Quicken leases in the Compuware Building.

Gilbert had no comment on the reports confirmed by real estate sources about the Dime, but in the recent past he has said he hopes remaking the various buildings will allow him to create a Detroit 2.0 – a downtown catering not only to Quicken’s employees but to other Internet-based firms looking for a lively urban experience.

Built in 1910, the Dime Building was designed by the famed Chicago firm of architect Daniel Burnham, and remains one of downtown’s oldest surviving skyscrapers.

Gilbert’s momentum is great news for downtown. Unlike many landlords and property owners already established down there, he has no history of neglecting his property and in the past has shown great enthusiasm in wowing other companies to join him in his vision he has dubbed, Detroit 2.0. The Free Press has also released another article on Gilbert’s recent activity, click here.

I'm currently a Project Manager at Cypress Partners, LLC in Bloomfield Hills, Mich. I graduated from Wayne State University in 2008 with a B.A. in Journalism. Looking to broaden my view of the world, I spent a semester abroad studying at the University of Salford, a Greater Manchester University in England. I enjoy doing an array of activities, including following Detroit sports teams, SCUBA diving, traveling, reading, playing tennis, hand-written letters and going to the movies. I am the co-founder of the Woodward Spine, a blog about Detroit and its surrounding communities. The Woodward Spine aims to inform its readers about relevant news and events through creative and informative posts in these core areas: news, opinion, entertainment, history, sports and development. The Woodward Spine serves the tri-county metro Detroit area, concentrating mainly on the communities that lie along the Woodward corridor.
View all posts by Jeffrey S. Buck →
This entry was posted in Detroit and tagged dan gilbert, detroit, detroit free press, dime building, downtown, quicken loans, shorpy. Bookmark the permalink.