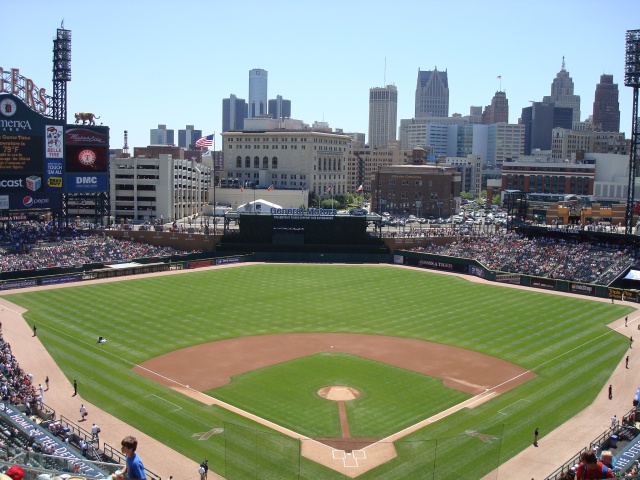 Comerica Park opened its doors in April 2000. It was a visual masterpiece with a touch of Tiger charm from its unobstructed views to the large tiger head lights surrounding the outer perimeter of the park. As the years have ticked away, season after season, the park has slowly transformed. Seats in certain sections have been replaced, outfield walls brought in, bullpens relocated, LED boards added and restaurants swapped. Mike Ilitch has done a decent job of keeping the stadium feeling fresh for a fan experience one won’t forget.

However, these changes have only been a few of what overall needs to be changed. After recently visiting the homes of the San Francisco Giants and the Baltimore Orioles I’ve come up with a list of the top five things that the Detroit Tigers front office needs to address regarding Comerica Park.

When the park opened, it boasted one of the largest scoreboards in the league. Since then it has lost that designation and is no longer a visual wonder in any respects; the majority of the board is home to ads that surround a small and often times not fully functioning video screen. Due to a design flaw the scoreboard is even positioned to far to the left, when looking at it, and from certain seats in the park you can’t see the entire board. Several stadiums have taken the initiative and replaced their scoreboards with giant screens that show both the box score and video. If you’ve visited one of these parks then you understand that our scoreboard should be replaced more sooner than later.

When it first opened it was two stories and quite expansive. Shortly thereafter the selection within the store and the physical size of the store was reduced. At the start of the 2011 season, however, the Tigers shifted their store into an entirely new space within the ballpark –though the inventory has remained thin. Other team stores throughout the league offer an array of items from bedding to jackets to autographed memorabilia to car accessories. It can be tough sometimes to find that Detroit Tigers souvenir without having to order over the Internet.

Although Comerica is located downtown it still lacks that true city feel due to the large amount of parking located directly around the park. Parking is needed in the Foxtown area simply due to the sheer amount of suburban people who have no choice but to drive to the park. This however could be achieved through other lots scattered throughout the immediate area. It’s time for the city or Mr. Ilitch to take the steps at developing these lots into more practical uses. What I envision (and have heard that this is was the ultimate plan) is creating some sort of mixed use buildings that house bars, restaurants and retail shops on ground level, with parking in the form of below-grade or on top of the ground level and either office space (which at this time isn’t exactly needed) or market rate apartments/condos/rooftop decks (servicing the restaurants/bars). It would help the atmosphere before games and offer fans not attending the game the chance to come downtown and be close enough to hear the sounds of the park. The biggest obstacle is Ilitch and the fact that these establishments would directly compete with concessions inside the park.

The People Mover in large gets a very bad wrap for numerous reasons:

I agree with a few of these but it does come in handy for several events downtown when used right. This outdated transit system needs to be expanded and should have been long ago. Downtown and the surrounding areas especially Midtown continue to grow, and Marian Ilitch owns Motor City Casino which sits far out of the “walking to Comerica/Foxtown” area. It would only make sense for him to either petition the city through private funding to expand the current line or even add a second loop that uses a common stop (probably Grand Circus) as a transfer point. He could create a loop that takes riders to the casino, Masonic Temple, Comerica Park, Ford Field and maybe even the Max Fisher Music Center.

Brush Street between Comerica Park and Ford Field could be utilized a lot better. It could be incorporated in game days for both stadiums in a manner similar to Camden Yards’ Eutaw Street, rather than its current function of helping people maneuver around the area. The street could serve as a better entrance to the rear of the park with vendors, games and a party like feel to it. It could also be home to a “Stadium Station” of a newly expanded people mover. It’s potential is high but since Ford Field opened hasn’t lived up to it. The Elwood seems to be the only thing back there offering any sort of entertainment on your way in.

I'm currently a Project Manager at Cypress Partners, LLC in Bloomfield Hills, Mich. I graduated from Wayne State University in 2008 with a B.A. in Journalism. Looking to broaden my view of the world, I spent a semester abroad studying at the University of Salford, a Greater Manchester University in England. I enjoy doing an array of activities, including following Detroit sports teams, SCUBA diving, traveling, reading, playing tennis, hand-written letters and going to the movies. I am the co-founder of the Woodward Spine, a blog about Detroit and its surrounding communities. The Woodward Spine aims to inform its readers about relevant news and events through creative and informative posts in these core areas: news, opinion, entertainment, history, sports and development. The Woodward Spine serves the tri-county metro Detroit area, concentrating mainly on the communities that lie along the Woodward corridor.
View all posts by Jeffrey S. Buck →
This entry was posted in Detroit, Sports, Tigers and tagged baltimore, baseball, brush street, comerica park, detroit, Detroit Lions, detroit tigers, ford, ford field, fox theater, foxtown, little caesars, max fisher music center, mike ilitch, MLB, NFL, parking, people mover, san francisco, suburb. Bookmark the permalink.