Posted on September 6, 2011 by The Woodward Spine

In the first month of 2009, when the Lions agreed to terms with new head coach Jim Schwartz, the team made their first move back toward relevance, and for maybe the first time in the team’s history became a pioneer in the NFL.

With Schwartz’s hiring the Lions took the first step into the next century of advanced stats. Since as early as 2003, Schwartz has been hailed as the premiere stat head in the league. A Georgetown graduate with a degree in economics, Schwartz’s dedication to advanced statistic analysis has served him well in his career, and two years into his tenure, it is serving the Lions well too.

Despite its bullshit conservative, Christian mythology, football has always been more open to change and new thinking than other sports, so Schwartz’s reputation as football’s Billy Beane is not totally accurate. But Schwartz is the first head coach who has embraced the statistical revolution, and it makes the Lions better equipped to improve year to year than the rest of the teams in the league.

Football Outsiders is the leading voice in advance statistics, and Schwartz has worked with the group in the past. Schwartz called their yearly football almanac “the most accurate insight into why teams really win and lose.”

What drove Schwartz and the writers at Football Outsiders towards advanced stats was the importance of context, an element not considered in traditional football statistics like total yards or yards-per-carry. In a 2008 New York Times piece Schwartz bemoaned the focus on his defense’s sixth-place ranking in total yards allowed.

“’Who cares who is leading in yardage?’ Schwartz said, pointing out that allowing a 12-yard run raises the total but is meaningless on a third-and-20 play.

It is this general conceit that drives almost all of the analysis and prediction in Football Outsiders’ Almanac 2011. While the group has a myriad of other fascinating statistics for tracking individual players and predicting player performance, the basis for their team predictions is driven by their DVOA (Defense-adjusted Value of Average) statistic. That calculation assigns points to each play based on down and distance, situation and field position; because a three yard run on third-and-two is not the same as a three yard run on third-and-10.

A full explanation of DVOA and more of Football Outsiders’ stats can be found here, the basic concept is summed up on the group’s website.

“DVOA is a method of evaluating teams, units, or players. It takes every single play during the NFL season and compares each one to a league-average baseline based on situation. DVOA measures not just yardage, but yardage towards a first down: five yards on third-and-4 are worth more than five yards on first-and-10 and much more than five yards on third-and-12. Red zone plays are worth more than other plays. Performance is also adjusted for the quality of the opponent. DVOA is a percentage, so a team with a DVOA of 10.0% is 10 percent better than the average team, and a quarterback with a DVOA of -20.0% is 20 percent worse than the average quarterback. Because DVOA measures scoring, defenses are better when they are negative.”

With this more useful statistic as a foundation, Football Outsiders combine their advanced statistics with scouting to make predictions and analyze each team. Last year the group accurately predicted nine- of the 12-playoff teams. What the group does better than predict performance is evaluate talent, and it can spot when a team is performing far beyond its roster due to luck and circumstance, like the 2009 Bengals (who fell to earth hard) or last year’s Bears team, which is due for a precipitous regression this season.

In the 2011 Almanac each NFL team gets a Mean Projection for wins based on three equations that forecast DVOA for offense, defense and special teams, and then uses those equations to run 10,000 simulations of the 2011 season. The almanac goes on:

“The resulting possible win totals are then separated into five categories:

The percentage given for each category is dependent not only on how good we project the team to be in 2011, but the level of variation possible in that projection, and the expected performance of the teams on the schedule.”

For the writers, the categories are the important part, and the mean win projection included only due to reader inquiry, the projections typically involve fractions so are obviously not an actual prediction of win totals.

Due to the lockout and the rush of free agency, the 2011 almanac does not include every recent roster change, an issue acknowledged by editor Aaron Schatz in the book’s introduction. That issue however, greatly affects the Lions’ defensive predictions.

The author lists the Lions defensive line as “one of the deepest, most talented lines the NFL has seen in years,” but ranks the linebacker group as below average and notes that “you can only smear one unit’s excellence so far across the rest of the roster,” when considering the front four’s ability to cover the rest of the defense’s weaknesses. But the predictions do not consider the two major signings of the Lions’ offseason, Stephen Tulloch and Justin Durant.

With those two signings the Lions improved their starting linebackers from a unit with the 30th and 44th ranked players grouped with a host of unranked scrubs to a starting core with the seventh, 30th and 40th best linebackers in the league. At a position with over 100 starters league wide, all of the Lions starters rank in the top 40 at their position, something no team other than the Steelers can boast. 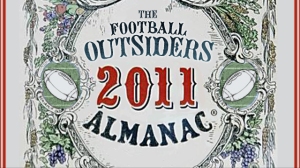 Based on the Football Outsiders individual rankings, the Lions have the second most talented linebacking core in football now, and while scheme and situation will determine if they perform at that level, combined with the impressive front line, the Lions have the best front seven in the NFL. That is a huge difference from the D-line being smeared thin to cover every other unit’s deficiencies.

More specifically, Durant and Tulloch address the Lions’ biggest issue, run stopping and broken tackles. According to the outsiders, “the Lions ranked 26th in the league in Second Level Yards and 23rd in Open Field Yards, meaning they were in big trouble when running backs made it past the front four.” Durant was the third ranked run stopper in the league according to the Outsiders’ metrics and while Tulloch was ranked only 59th against the run, he is a tackling machine whose 2.8-yards-allowed-per-run-stop puts him among the league’s elite.

The second and admittedly more biased issue I take with the predictions is at the quarterback position. I am simply not ready to admit that Matthew Stafford will be injured again this year, of course it is a possibility, but I think everyone’s hopes and expectations will be drastically altered by another injury to number nine. It is a total homer caveat for me to say if Stafford doesn’t get injured, and I think it is only correct that the outsiders’ would hedge their bets on his health, but still, like every other Lions fan I find myself saying it.

If Stafford doesn’t get injured, the Lions quarterback position becomes a real strength. Because of how little he has played, the advanced stats aren’t much use in evaluating him. As the outsiders put it, “Stafford aces the eyeball test when he is in the lineup, but his career lacks traction, so we still don’t know what to expect if Stafford manages to string 8-10 consecutive games together.”

Because of that uncertainty I am free to insert my own biases and eyeball test results. In limited action the past two seasons Stafford has looked good, and the weapons he has in Calvin Johnson, Titus Young, Brandon Pettigrew, Jahvid Best and Nate Burleson in a more suitable role if Young can contribute, make him poised for a breakout season. Drew Stanton and Shaun Hill are the best backup tandem in the league, but neither of them possess the ability that Stafford does to do what the Lions need the most: throw it hard, high and long to Megatron, over and over and over again. While the predictive benefits of preseason performance are limited at best, his insane preseason (25-for-33 for 395 yards with five touchdowns and no interceptions) certainly makes it hard not to have dreams of future greatness.

After starting with an examination of hard stats and expert opinion I am suddenly back to that familiar place for Lion fanhood: hope and exuberant conjecture. But even if Stafford can’t go the distance, the Lions’ frightening front seven and expanding stable of skill players will carry them into the playoffs and through round one.

Mark it down, using both stats and blatant homer romanticism I’ve found the Lions’ number: 10 wins and a spot in the second round.

The Woodward Spine was the brainchild of Michael Fossano and Jeffrey Buck, two Royal Oak, Mich. natives who met nearly 10 years ago while attending the now-defunct George A. Dondero High School. It seemed fitting for the two Wayne State University alums to craft an outlet to help continually refine their writing skills, while also serving as a trusted source of information for the metro Detroit community. The Woodward Spine aims to inform its readers about relevant news and events through creative and informative posts not only by Mike and Jeff, but other upstanding citizens as well who are driven and proficient in these core areas: news, opinion, entertainment, history, sports and development. The Woodward Spine serves the tri-county metro Detroit area, however concentrating mainly on the communities that lie along the Woodward corridor.
View all posts by The Woodward Spine →
This entry was posted in Detroit, Lions, Sports and tagged detroit, dvoa, Football, georgetown, lions, Michigan, outsiders almanac, shwartz, stafford. Bookmark the permalink.