Below is a photograph of the Edelweiss Cafe. This building is much more historically significant than it looks because of its ties to the Kiwanis Club. Here is some quick information on the club:

“The organization originated in August of 1914 in Detroit, Michigan from a conversation between Allen S. Browne and Joseph G. Prance. Browne’s idea was to solicit business and professional men asking them if they would be interested in organizing a fraternal organization with a health benefit feature. Brown was compensated five dollars per new member that joined for his operating budget. Browne and Prance set out and recruited enough members to apply to the state for a not for profit status. The state approved the application on January 21, 1915 and The Supreme Lodge Benevolent Order Brothers was formed. The name was changed to Kiwanis a year later. The Kiwanis Club of Detroit is the original local club in Kiwanis.  By 1927 the organization had more than 100,000 members.”

According to the Kiwanis Club of Mecklenburg this was the site of the very first meeting:

“By November, 1914 thirty-five members had signed up, and the first meeting was held at the Edelweiss Café in Detroit, Michigan. One member proposed that the first order of business be to agree on a suitable name for the organization (hardly anyone liked “BOBS”). Detroit City Historian Clarence Burton suggested an Indian phrase, “Nunc Kee Wan Nis,” whose meanings could be interpreted as “We gather together for self-expression” or, simply “We Trade.” The name KIWANIS thus was coined.”

After researching where this building once stood, I found that it was on the corner of John R and Broadway (once called Miami) but I can’t confirm this. The structure that is standing in it’s place is the Detroit Opera House Parking Garage.

Take a look at the photograph entitled “Edelweiss Cafe: 1912“:

Below is a shot of the same block today from street level: 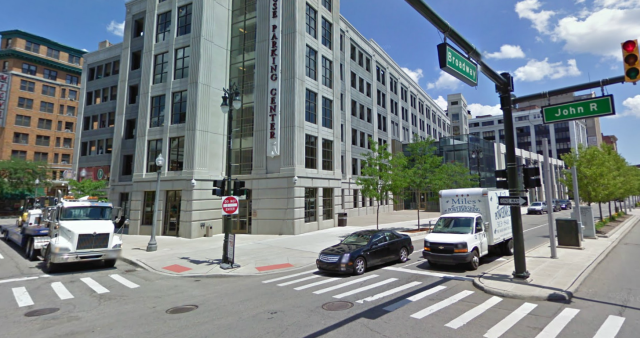 I'm currently a Project Manager at Cypress Partners, LLC in Bloomfield Hills, Mich. I graduated from Wayne State University in 2008 with a B.A. in Journalism. Looking to broaden my view of the world, I spent a semester abroad studying at the University of Salford, a Greater Manchester University in England. I enjoy doing an array of activities, including following Detroit sports teams, SCUBA diving, traveling, reading, playing tennis, hand-written letters and going to the movies. I am the co-founder of the Woodward Spine, a blog about Detroit and its surrounding communities. The Woodward Spine aims to inform its readers about relevant news and events through creative and informative posts in these core areas: news, opinion, entertainment, history, sports and development. The Woodward Spine serves the tri-county metro Detroit area, concentrating mainly on the communities that lie along the Woodward corridor.
View all posts by Jeffrey S. Buck →
This entry was posted in Detroit, Photos, Shorpy Saturday and tagged allen browne, broadway, detroit, edelweiss cafe, john r, kiwanis club, michigna, opera house. Bookmark the permalink.