Let me preface this entire piece by saying that last week’s news surrounding the possible return of the Detroit Belle Isle Grand Prix has me geeked up.

In case you weren’t aware, the Detroit City Council approved an application Tuesday for the return of the race to the island June 1-3, 2012. This would mark the race’s return to Detroit after a four-year absence following the meltdown of the domestic automakers.

It seems only fitting that the Motor City sees the return of what was once a crown jewel in the international open-wheel racing circuit, yet it does not come without a few caveats.

In 2007, IndyCar icon Roger Penske–the same man who is the driving force behind the 2012 Grand Prix–spearheaded the first relaunch of the race, following a six-year hiatus. As cool as it would be to have the event return home, I’ll be waiting with bated breath until it actually materializes, and furthermore demonstrates that it can be sustainable over the next few years.

Part of that equation will depend greatly on the amount of funding that event organizers are able to drum up from various metro Detroit companies–namely the Big Three and the other usual downtown power movers, including Quicken Loans and Compuware. According to the official Detroit Belle Isle Grand Prix website, the 2008 Grand Prix enjoyed a swell in corporate partners (69, up from 59 in 2007) and luxury chalets (40, up from 36), as well as attendance figures that hovered above 100,000.

Theoretically, officials shouldn’t have much of a problem scrapping together a few corporate bucks across town, but then again remember that this is Detroit and even during a renaissance period, the powers-that-be still find ways to jack things up. Oh yeah, then there’s that whole decade-long recession deal that still rears its’ head all too often. 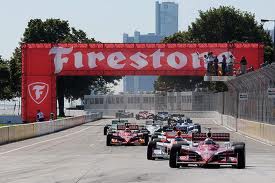 Another obstacle for organizers will be getting the everyman to comprehend and appreciate the differences between classifications of auto racing. NASCAR has enjoyed a huge jump in popularity over the past 20 years, which is no doubt due at least in part to the fact that interest in open-wheel racing has been all but phased out from the American sports landscape, reserved for the most remote channels of the cable dial.

We’re wading through uncharted waters of sorts as not only must international sports swashbuckle through prickly American attitudes, but our athletes are generally sucking right now at the sports that we do pay an ounce of mind to. Without that iconic figure to draw us in, we’re more prone to return to the safe sports that treat us like pigs at the slaughterhouse.

While the 35 and up crowd can recall fond memories of the likes of Mario and Michael Andretti zipping through the downtown Detroit streets, and later the Belle Isle track, the generations behind them are completely devoid of any emotion toward the sport. I’m not sure if they’d have more success bringing the race back to the street circuit along Jefferson, but major improvements on the Belle Isle track were lauded during the last go ’round to satisfy complaints of muddy and cumbersome paddock areas.

With that said, other than the recent dark periods, like the Detroit APBA Gold Cup, the Grand Prix is an event that can galvanize the region. There are legions of fans from around the globe that would descend on our city, providing a tremendous annual shot in the arm and more importantly, a grand platform to continually help rehabilitate its image.

Here are a few suggestions on how to draw people:

2 Responses to Detroit Grand Prix revival in the works