Posted on October 5, 2011 by The Woodward Spine

Last week, a certain high profile MLB pitcher decided he was going to do something special for a cupla Tiger fans via the Twitter account he uses sporadically to host contests, pique our interest for upcoming media appearances and for the occasional #union shout out.

But the contest Justin Verlander announced Friday was different. This time, Big JV was giving away a pair of *PLAYOFF* tickets to one of his followers for ANY GAME OF THEIR CHOOSING. All he asked was that those interested use the #tigersALDS hashtag and “do something creative” to explain why they deserved them. In >140 characters, of course (A twitter rule).

Because the stakes were super high and money to buy such highly coveted seats is currently scarce in Detroit (tix for last night’s game were selling for more than three times face value), JV’s offer elicited quite a response. And people got pretty creative.

For example, our own writer, @jsbuck, attempted to get creative with it– he told JV he was worthy of the pair because he’d take his dad who [tear] had to leave in the 8th inning for work during a playoff game in ’06. 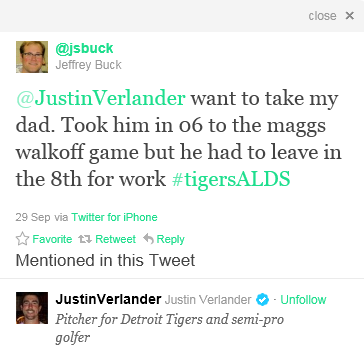 I think JV might have overlooked his stunning bid for the tickets though because having a job in this area alone is pretty hard to come by.

Meanwhile, some women tried to get “sexy” with it– one potential furry tweeted she’d been sporting tiger ears and a tail around the office for weeks. Another possible furry posted a Twitpic of two stuffed tigers getting it on in a cheap-looking apartment complex bedroom:

One guy dared to take an extremely unconventional approach, complaining that his typically-winning team hadn’t done so hot this year and saying he’d settle for watching a Tigers playoff game: 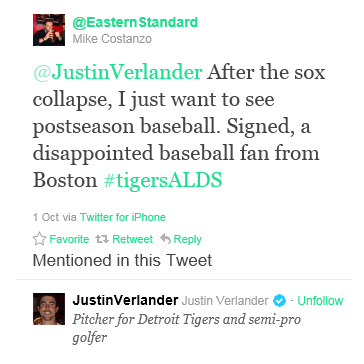 Somehow, JV was unmoved. In response to the flurry of sub-par ticket pleas, he offered a piece of advice:

So, people started pulling out the big guns. One woman even used her do-gooder friend (or perhaps just some lady she knew looking for an extra buck from the government) to appeal to Verlander’s pathos: 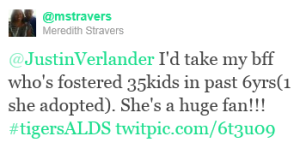 But, ultimately, it would be this face that captured JV’s heart:

Bryan, a 22-year-old from Jackson suffering from muscular dystrophy, brought to Verlander’s attention by a tweet from one of Bryan’s friends (Bryan, apparently, does not have twitter and even if he did, his asking for the tickets would somehow seem strange and self-pitying). And unlike the woman who attempted to use her friend’s altruism for her own benefit, the kid who tweeted Bryan’s photo WASN’T EVEN TRYING TO GET IN ON THE TICKETS. He goes to school in Dayton, so Bryan was to take his dad.

The whole thing ended very sweetly. It did, however, leave this guy– who at one point seemed destined for the seats– pretty pissed and demanding an autograph from JV, at the very least.

The Woodward Spine was the brainchild of Michael Fossano and Jeffrey Buck, two Royal Oak, Mich. natives who met nearly 10 years ago while attending the now-defunct George A. Dondero High School. It seemed fitting for the two Wayne State University alums to craft an outlet to help continually refine their writing skills, while also serving as a trusted source of information for the metro Detroit community. The Woodward Spine aims to inform its readers about relevant news and events through creative and informative posts not only by Mike and Jeff, but other upstanding citizens as well who are driven and proficient in these core areas: news, opinion, entertainment, history, sports and development. The Woodward Spine serves the tri-county metro Detroit area, however concentrating mainly on the communities that lie along the Woodward corridor.
View all posts by The Woodward Spine →
This entry was posted in Detroit, Sports, Tigers and tagged alds, comerica park, detroit, justin verlander, post season, tigers, twitter. Bookmark the permalink.