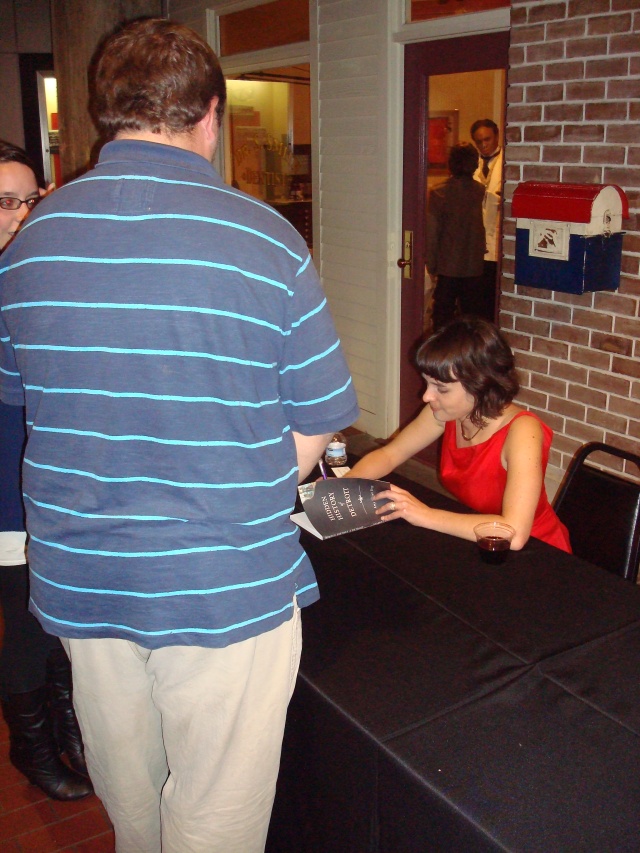 Why did someone build that building there? What was there before that? Why is that man immortalized with a bronze statue? What did we do before the automobile?

These are some of the questions that Amy Elliott Bragg, of Night Train to Detroit, wanted answered. You may not know it, but the “hidden” history of Detroit is present in a lot of unique landmarks scattered throughout the area. Last night Bragg held her very first book release party for Hidden History of Detroit in arguably the best venue dedicated to preserving Detroit’s history– the Detroit Historical Museum.

“A lot of history is behind the bronze statues that we don’t necessarily think about,” said Bragg. “I love the history behind that and I think that’s really where hidden history is, right under your nose. I didn’t crack any unsolved mysteries or dig up any long lost documents. Everything I worked from was right in front of me.”

The evening began with Bragg’s Husband, Scott, introducing his wife. From the moment she took the podium you could feel the energy and passion for Detroit history that Bragg posses. She beamed with excitement as she took us through the interesting journey of writing her first book.

It all started when she returned home to Farmington Hills, a Detroit suburb, from Milwaukee. She admits to having learned about Detroit in school but perhaps forgetting certain things like how we played an integral role in the Underground Railroad and not being taught enough about what came before Henry Ford. Bragg, while in Milwaukee, understood the basics about many events that had taken place but had a hard time placing them in the correct order and the details about them. So in an effort to solve those problems, when she moved back she was determined to sort things out and her quest began at libraries and more specifically it started with books. 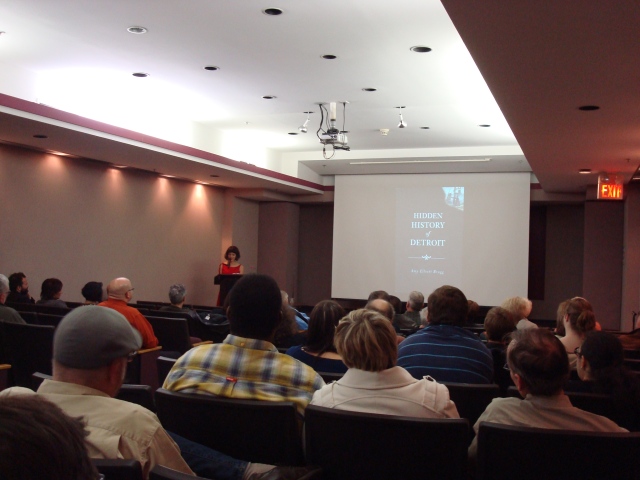 Research for her book took her to many places throughout the city from the Detroit Institute of Arts to the Detroit Historical Museum to several of the cemeteries. Bragg found herself in many of Detroit’s skyscrapers citing a time in the Guardian building where she found herself in a room, which evidently is not open to the public, that housed a giant portrait of Joseph Campau. A security guard ushered her out of the room before she had to much time to take it in. Her discovery of several books were the foundation of her own book and she shared with her attentive audience a few of them she’s grown to adore now.

Published in 1935 by two sisters who were teachers in Detroit, History of Detroit for Young People, offered her an alternative to those heavy, long traditional history books. In a way it seems it allowed her to understand not only the history of Detroit but how children of the era in the city were expected to act and what sort of problems they may encounter in a developing metropolis.

The book goes on to talk about Detroit’s history from Cadillac to Henry Ford but what really caught Bragg’s eye was an appendix in the back of the book: A collection of self guided tours of some of Detroit’s most famous sites.

“So I knew we needed to do a few of these itineraries, so I took Scott and we choose a couple of the itineraries and went downtown,” said Bragg. “And I kind of just expected everything to be gone, I just thought well none of this exists anymore so will see what happens.”

But it was actually completely the opposite. One of the itineraries they chose took them on a tour of Capitol Park, an area not only historically significant to Detroit but to Michigan as a whole. It opened her eyes to the amount of history that is layered upon each block. Many of the historic signs indicating what was there before still stand and the statue of Michigan’s first Govenor, Stevens T. Mason, still exists.

“It was liberating to know that so much happened in the history that had nothing to do with cars,” Said Bragg.

She continued with other books and stories that she came across recalling how issues we are dealing with today are in fact not new and have been dealt with in years past. Detroit throughout its history has continually questioned whether or not to tear buildings down because of the history they’ve had on the city. These arguments about preservation versus razing continue to wage on today. 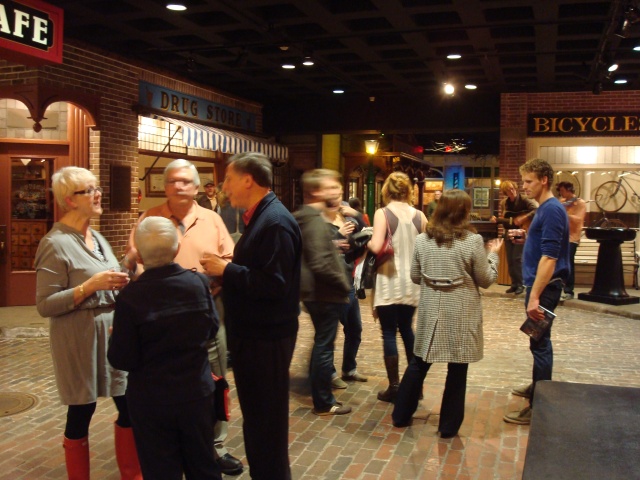 The Early Days of Detroit, a book well over 1000 pages published in 1906, offered quite a glimpse at this idea. It hawked on the idea that we must preserve history but also move forward with bigger and better things.

“These old buildings are a part of our history and we want them to be here but, they are also kind of in our way,” said Bragg. “And that was a common theme throughout this book.”

A final theme Bragg talked about was the debate about the photographing of abandoned structures and publishing them in magazines and newspapers, commonly known as urban exploring. Jean-François Hamtramck (you guessed it, that’s where the city’s name stems from) lived in a home in what is now Gabriel Richard Park. His home passed hands many times and was vandalized throughout the years following his death. People would flock to it for picnics and would come to paint pictures, an impact not unlike that of Michigan Central Station on our modern-day culture.

Bragg started this journey of learning about history not knowing she would write a book. This hidden history was the stuff you don’t learn about in school. It’s the laws we never thought existed or the ones we never knew how they came about. It’s things that happened such a long time ago we don’t question them or really understand what was going on at the time. A blog of her findings fueled the idea that a book was possible.

It was fitting that once Bragg received her round of applause the audience poured out into the Streets of Detroit, the extremely well thought out exhibit that lets visitors experience Detroit through several decades dating back to the 1800’s. A live duo entrained the cluster of guests with music as they mingled with one another over glasses of wine and h’orderves, which were provided by Fresh Chef Detroit.

Bragg answered questions and signed copies of the matte black soft cover book at a table in front of a storefront decorated to resemble a barbershop of yesteryear.

You could hear in her voice and see in her movement just how much fun she had writing this book and the new love for Detroit and it’s history that she had discovered in doing so. I’m looking forward to reading The Hidden History of Detroit and have a feeling I’ll be recommending it to friends.

I'm currently a Project Manager at Cypress Partners, LLC in Bloomfield Hills, Mich. I graduated from Wayne State University in 2008 with a B.A. in Journalism. Looking to broaden my view of the world, I spent a semester abroad studying at the University of Salford, a Greater Manchester University in England. I enjoy doing an array of activities, including following Detroit sports teams, SCUBA diving, traveling, reading, playing tennis, hand-written letters and going to the movies. I am the co-founder of the Woodward Spine, a blog about Detroit and its surrounding communities. The Woodward Spine aims to inform its readers about relevant news and events through creative and informative posts in these core areas: news, opinion, entertainment, history, sports and development. The Woodward Spine serves the tri-county metro Detroit area, concentrating mainly on the communities that lie along the Woodward corridor.
View all posts by Jeffrey S. Buck →
This entry was posted in Detroit and tagged amy elliot bragg, detroit, detroit historical museum, history, Michigan. Bookmark the permalink.