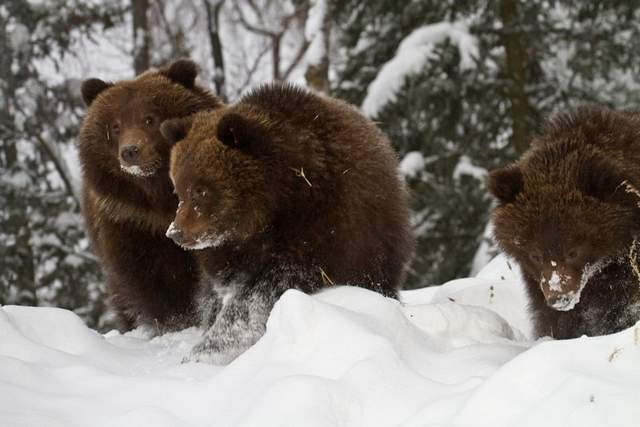 Three orphaned grizzly bear cubs will soon call the Detroit Zoo home. The 10-month-old brothers were orphaned in October after their mother was shot and killed by a poacher.

The bears are being cared for at Anchorage’s Alaska Zoo and are scheduled to arrive in Detroit by the end of November.

“It’s tragic that the cubs’ mother was killed. We will take good care of them,” said Ron Kagan, Detroit Zoological Society Executive Director.

The poacher who shot the mother grizzly has been arrested and will be prosecuted.

After the mother was killed, her cubs were spotted several times wandering through residential areas near Anchorage foraging for food.

The Alaska Department of Fish and Game contacted the Detroit Zoo seeking sanctuary for the bears because they didn’t think that the cubs would survive the harsh Alaska winter without their mother.

It’s worth noting that the Detroit Zoo is also home to two other rescued grizzly bears. Female Kintla, 27, was captured by Montana’s Department of Fish, Wildlife and Parks in 1986 and male Lakota, 26, came via Yellowstone National Park after being deemed a public threat by the U.S. Fish and Wildlife Service.

The three cubs are approximately 2½ feet tall and weigh 100 to 125 pounds. Once they arrive at the Detroit Zoo, they will be out of public view for 30 days while they undergo health screenings and get acclimated with their new surroundings.

The grizzly bear, which can grow to 8 feet tall and 800 pounds, has a lifespan of 25 years in the wild. It is listed as threatened under the Endangered Species Act; only about 1,000 remain in the continental U.S.