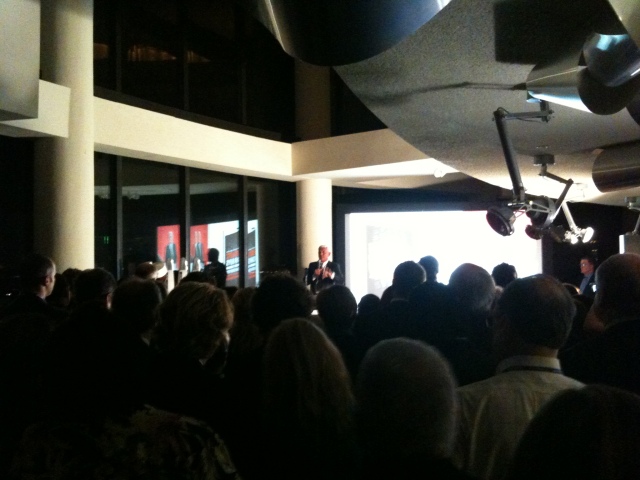 Several of the best and brightest designers were recognized January 8 during the 2nd Annual MAIN Event held high above the city of Detroit at Coach Insignia on the 71st floor of the Renaissance Center. Sponsored by Michigan’s Lawrence Technological University, the program celebrated the year’s accomplishments in design and innovation in a variety of industries.

Attendees of the evening represented more than just the auto industry. Guests were welcomed from other sectors including aerospace, medical and defense. This year’s event was also capped off with a fashion show, put on by local designer Fotoula Lambros, showcasing today’s innovative garment design techniques.

Keynote speaker Bob Lutz, an automotive icon in his own right and former Vice Chairman at General Motors, addressed the crowd about the importance of innovation and design in the auto sector. He authored a new York Times Best Seller last year entitled Car Guys vs. Bean Counters: The Battle for the Soul of American Business. It was difficult to hear him at times because of the awkward presentation area and sound system but he made it a point to explain the importance that designers have when it comes to new automobiles.

Lutz has concluded that in today’s auto industry quality and reliability are arguably the same at all of the car companies. It comes down to the styling and look of a car to really sell it to the customer.

Today’s generation of car buyers are expecting something new and fitting for today’s fast changing world. The next generation of designers are trying to figure out that want and create something that all generations will fall in love with.

Among those young designers attending the evening was Colin Bonathan, a Lawrence Tech student, who showcased a 2025 Lincoln Continental model he and his classmate, Jeeho Cha, designed for a Ford Motor Company Competition. Bonathan was responsible for the design of the exterior of the automobile that was completed for a volunteer project that saw only him and Cha, who designed the interior, actually completing and submitting. 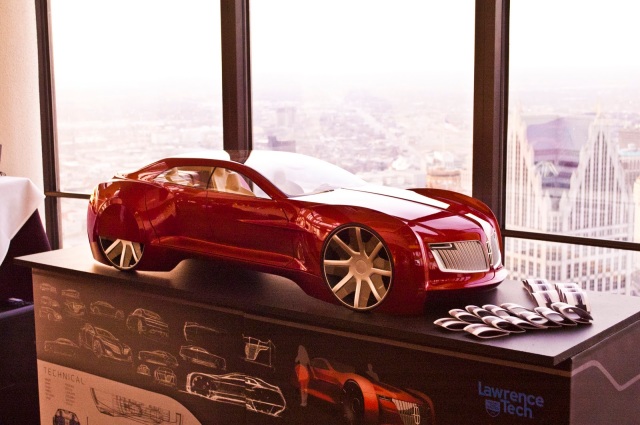 “We were the only two who actually finished out the project,” said Bonathan. “It was up in the air if Ford would actually build it. We presented our idea and they liked it so they created it and built it for us.”

The model is made of several materials including coarse foam as the base. The majority of the model is nylon, which was grown for the specific project through computers. The team at Ford then primed and painted the model to finish it off. Bonathan was pleased with the model saying it “turned out way better than we (Bonathan and Cha) could have ever expected.”

A lot of time and effort was put in at all stages of the project but most importantly the beginning and planning stages. The vision for the car consisted of many factors that it may come across in the future.

“It started with seeing what segment and what year we wanted to design for and we actually created a reality around that year to design to,” said Bonathan. “So the vision for that future is one with a lot better infrastructure for roads where it’s no longer private jets and planes taking everybody everywhere. It’s actually a robust infrastructure that allows for high speed transport on roads.”

Although a project like this is often a practicum, a final thesis, Bonathan is only entering his junior year at Lawrence Tech. He hopes to finish in two years with a degree in Transportation Design.

I'm currently a Project Manager at Cypress Partners, LLC in Bloomfield Hills, Mich. I graduated from Wayne State University in 2008 with a B.A. in Journalism. Looking to broaden my view of the world, I spent a semester abroad studying at the University of Salford, a Greater Manchester University in England. I enjoy doing an array of activities, including following Detroit sports teams, SCUBA diving, traveling, reading, playing tennis, hand-written letters and going to the movies. I am the co-founder of the Woodward Spine, a blog about Detroit and its surrounding communities. The Woodward Spine aims to inform its readers about relevant news and events through creative and informative posts in these core areas: news, opinion, entertainment, history, sports and development. The Woodward Spine serves the tri-county metro Detroit area, concentrating mainly on the communities that lie along the Woodward corridor.
View all posts by Jeffrey S. Buck →
This entry was posted in Detroit and tagged auto, auto show, chrysler, detroit, ford, gm, Michigan. Bookmark the permalink.