This is part one of a two part series showcasing a one of a kind project involving the 1940 US Census. With the help of several volunteers the soon-to-be released digital images of the 1940 US Census are to be indexed and available to the public for free. Find out about some of Detroit’s most famous citizens that were apart of the Census. 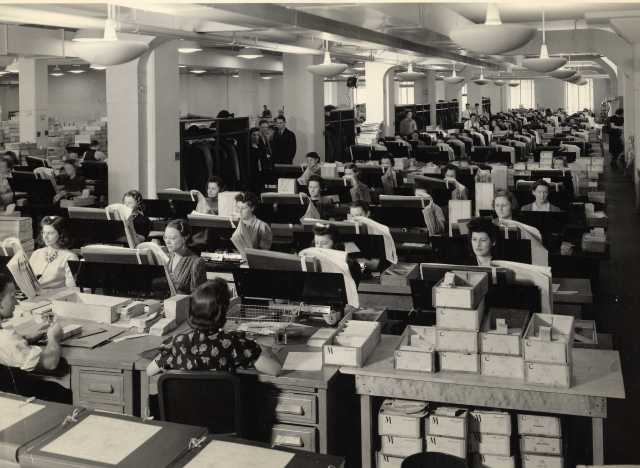 The goal of this project is to start indexing the 1940 US Census, being released as free digital images for the first time in history, to make make them searchable online with free and open access. Overall data from the Census has been available for decades but data specific to individual respondents by rule is only released after 72 years.  This is very exciting, as many people who were alive in 1940 are still living today. Aside from the usual questions, this Census includes a few new unique questions such as where people lived 5 years before, highest educational grade achieved and detailed income and occupation information.

Let’s take a look at a few famous Detroiters that you can find in the 1940 US Census:

As founder of the Ford Motor Company, he revolutionized the automobile by developing the assembly line technique of mass production. He was born on July 30, 1863 in Greenfield Township, Michigan. The 1940 US Census would be the final time Henry’s name would appear after passing away of a cerebral hemorrhage on April 7, 1947 at Fair Lane, his Dearborn estate.

Fisher was a former GM Vice-President who along with his brother Fred and uncle Albert founded the Fisher Body Company. With the help of their other five brothers the company grew quickly to become the largest manufacturer of auto bodies in the world. Fisher passed away in 1963 but his legacy lives on through numerous things throughout Detroit including his 18,000 square foot George Mason designed Tudor revival style mansion in the Boston-Edison Historic District, also the neighborhood of one of Henry Ford’s houses.

Edsel was the only child of Henry and Clara Ford. He lived a rather short life passing away in 1943 due to stomach cancer at the age of 49. It’s unfortunate that, like his father Henry Ford, this would be the last census that Edsel would appear on. He accomplished quite a lot at his father’s company as President. He is responsible for strengthening production of Ford overseas and the naming of the Mercury division. He had four children with wife Eleanor and built a beautiful estate designed by Albert Kahn in Grosse Pointe Shores. The property, by wish of Eleanor at her death in 1976, is now used for “the benefit of the public.”

William was the youngest son of Edsel and the grandson of Henry Ford. A graduate of Yale University, Ford is known best for being the owner of the Detroit Lions since 1963 when he purchased a controlling interest in the team. He worked briefly at Ford Motor Company and has appeared on the Forbes 400 list of the richest people in America with a net worth of over a billion dollars. In 1940, at the time of the census, William would be 15 years old and most likely living with his parents in Grosse Pointe Shores.

Matilda was the widow of John Francis Dodge, co-founder of the Dodge motor car company but she is probably best known for the home she built known as Meadow Brook Hall. Upon John Dodge’s death she inherited his share of the Dodge Brothers Company making her one of the wealthiest women in the United States. She then married Alfred Wilson, a lumber baron, and upon his death received a bulk of his estate. Meadow Brook Hall, located in Rochester Hills, is currently listed as sixth on the list of largest historic homes in the Unite States at 88,000-square-feet. The home is currently open to tour and hold special events.  The 1940 US Census would be the second in which she called Meadow Brook Hall home.

This American ceramic artist was a co-founder of Pewabic Pottery. Originally from the Upper Peninsula she moved with her family to Ann Arbor before finally Detroit. She established the ceramics department at the University of Michigan and also taught classes at Wayne State University. While at Pewabic she oversaw the production of architectural tiles, lamps and vessels. She worked at the pottery until her death in 1961. Her work can be seen at several Detroit buildings including the Fisher Building, Cathedral Church of St. Paul and several former and current private residences like the Hecker-Smiley Mansion.

Fredricks is best known in Detroit as the sculptor of the Spirit of Detroit, a name it came to be known as after he claimed he never named it. The 16-foot-tall monumental sculpture, at the entrance of the Coleman A. Young Municipal Center, was installed in 1958. Fredricks was a part of the staff of Cranbrook Academy of Art in Bloomfield Hills and would have been in that area at the time of the 1940 US Census. He maintained studios in both Bloomfield Hills and Royal Oak until his death on April 4, 1998.

Gordy was the mastermind behind arguably the greatest record company to date, Motown Records. Nicknamed Hittsville, USA the original recording studio still stands today on West Grand Blvd. currently housing the Motown Museum. Gordy would leave Detroit and move his company to Los Angeles in 1972. Gordy, at the time of the 1940 US Census, a 10 year-old living in Detroit would go on to be one of the most successful and recognized celebrities out of Detroit. With his new fortune he purchased a large Mansion in the same neighborhood as Henry Ford and Charles Fisher. It was recently for sale.

Many people don’t know but Coppola gets his middle name from a certain Henry Ford. He was born in Detroit and only spent a short period of time here but 1940 was one of those years. Coppola was born on April 7, 1939 and moved with his family to Brooklyn a couple years later. It’s likely Coppola would have been a 1 year-old at the time the Census was conducted. His father was the first flutist for the Detroit Symphony Orchestra and later for the NBC Symphony Orchestra. Coppola is best know for his films including the Godfather trilogy.

Known to some as the “King of Motown” Robinson was a driving force of Motown Records since its inception. Originally a member of the Miracles, Motown’s first vocal group, he would go on to be an equally stunning solo act. From 1961 to 1988 Robinson held the role of vice-president at Motown. Robinson was born in 1940 thus making the 1940 US Census the first he would appear on, having been born in February of that year. He still tours today and was recently voted into the Rock ‘n’ Roll Hall of Fame.

Although Leonard was born in 1925, the 1940 US Census would be the first that he and his family would be accounted for in Detroit. Having been born in New Orleans to a site locator for General Motors, moving was something that happened frequently until 1934 when Detroit became permanent. Leonard graduated from the University of Detroit Jesuit High School and later from the University of Detroit. He’s the author of several works but is best know for Get Shorty, Out of Sight and Rum Punch (made into the motion picture Jackie Brown). Leonard still lives in the area and is an executive producer on the television show Justified (based on his novels Pronto and Riding the Rap) on FX.

Be sure to check back next week for Part two which includes athletes, politicians and more.

I'm currently a Project Manager at Cypress Partners, LLC in Bloomfield Hills, Mich. I graduated from Wayne State University in 2008 with a B.A. in Journalism. Looking to broaden my view of the world, I spent a semester abroad studying at the University of Salford, a Greater Manchester University in England. I enjoy doing an array of activities, including following Detroit sports teams, SCUBA diving, traveling, reading, playing tennis, hand-written letters and going to the movies. I am the co-founder of the Woodward Spine, a blog about Detroit and its surrounding communities. The Woodward Spine aims to inform its readers about relevant news and events through creative and informative posts in these core areas: news, opinion, entertainment, history, sports and development. The Woodward Spine serves the tri-county metro Detroit area, concentrating mainly on the communities that lie along the Woodward corridor.
View all posts by Jeffrey S. Buck →
This entry was posted in Detroit and tagged 1940, auto, census, detroit, genealogy, Michigan. Bookmark the permalink.