As Opening Day quickly approaches, April 4th, we’ve turned to our sports contributors to get their insight on just who we should keep an eye on in what we are dubbing “Tiger Watch.” 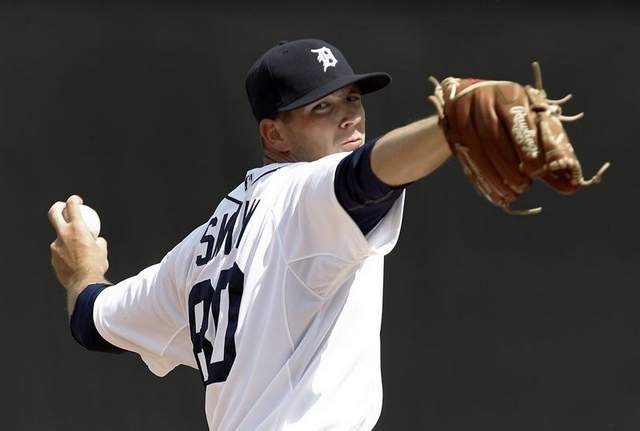 Odds are that at this time last week the average Detroit Tigers fan didn’t even know who Drew Smyly was. Less than 24 hours away from the Tigers regular season opener, odds are that Tigers fans now know him as the fifth starter of this uber-hyped 2012 ball club, they still don’t know much about the young southpaw. Going into this past offseason, it was assumed that the Tigers would sign a free agent to fill out their rotation, in what has become the teams annual search for a lefty starter. As the offseason came to a close and spring training began, it was expected that Tigers top overall prospect, Jacob Turner, would eventually beat out a field of Andy Oliver and Duane Below, another top five prospect and a lefty who performed well while with the team last year respectively, to assume the role of fifth starter. Alas, as the dust settled in Lakeland, Drew Smyly stood alone.

It is with all of that in mind that The Woodward Spine would like to shed some light on the latest edition to the Tigers rotation. Just two years removed from coming within two outs of throwing the first no-hitter in NCAA Division 1 championship tournament history as a redshirt freshman at the University of Arkansas, Smyly will make his first appearance in “The Show” on Wednesday, April 11th at home against the Tampa Bay Rays. Over the span of those two years, Smyly, enjoyed success in the Tigers minor league system to the tune of an 11-6 record, a 2.07 ERA (earned run average), a 9.3 K/9 (strikeouts per nine innings) ratio and a 3.61 SO/BB (strikeouts per walks) ratio. He pitched brilliantly in this past offseasons Pan American games, posting a 2-0 record with 17 strikeouts in 17 innings of scoreless work for Team USA. These experiences translated into a productive, composed, 2012 spring training. “I took the guy that I thought had good stuff, a good delivery and threw strikes. How that plays up here, we’ll wait and see. That usually plays pretty good anywhere.” said Manager Jim Leyland.

Now, it remains to be seen if any of these statistics translate to the major league level, but that at least seemed to be the case through spring training. It would be unfair to expect Smyly to perform on the same level as Justin Verlander, or even Doug Fister and Max Scherzer for that matter, but the Tigers don’t need him to. Stability is what’s needed most at the back end of this years rotation. The 2012 Tigers lineup should provide no shortage of run support, which Smyly will be able to take advantage of if he can control his pitches and limit mistakes. This is going to be an exciting summer of baseball in the Motor City and as of Opening Day it looks like Drew Smyly’s coming along for the ride.

The Woodward Spine was the brainchild of Michael Fossano and Jeffrey Buck, two Royal Oak, Mich. natives who met nearly 10 years ago while attending the now-defunct George A. Dondero High School. It seemed fitting for the two Wayne State University alums to craft an outlet to help continually refine their writing skills, while also serving as a trusted source of information for the metro Detroit community. The Woodward Spine aims to inform its readers about relevant news and events through creative and informative posts not only by Mike and Jeff, but other upstanding citizens as well who are driven and proficient in these core areas: news, opinion, entertainment, history, sports and development. The Woodward Spine serves the tri-county metro Detroit area, however concentrating mainly on the communities that lie along the Woodward corridor.
View all posts by The Woodward Spine →
This entry was posted in Detroit, Sports, Tigers and tagged baseball, detroit, detroit tigers, drew smyly, Michigan, MLB, opening day, sports. Bookmark the permalink.