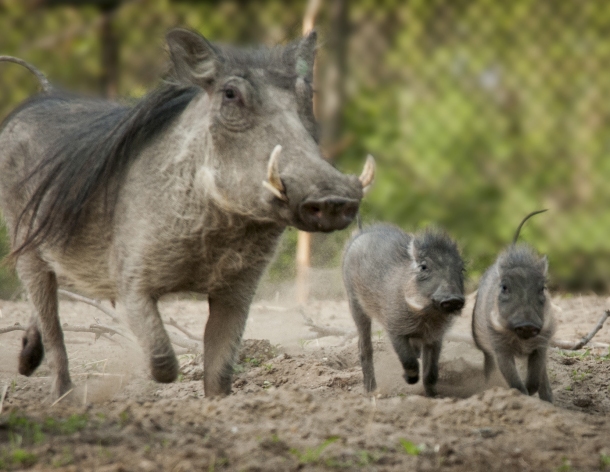 The birth is the result of a breeding recommendation from the Association of Zoos and Aquariums Species Survival Plan, a cooperative management program to ensure genetically healthy, diverse and self-sustaining populations of threatened and endangered species. There are currently just over a hundred warthogs in North American zoos.

“We’re excited to have these baby warthogs and to help this small population in zoos grow,” said Robert Lessnau, Detroit Zoological Society Curator of Mammals. “The piglets are very cute and we’re happy to introduce them to zoo visitors.”

Female warthogs give birth to litters of two to six after a gestation period of five to six months. The babies’ mother, 8-year-old Lilith, and her twin sister, Rebecca, are named for characters from the television series “Cheers”. Daphne is named for a character from the sitcom’s spin-off “Frasier”. The father is 3-year-old Linus, whose namesake is a character from the “Peanuts” comic strip, as is Violet’s.

The warthog (Phacochoerus aethiopicus) has a large head with a flat face, high-set eyes and elongated snout. A mature warthog stands about 30 inches tall at the shoulder and can weigh between 125 and 300 pounds. Its stocky, muscular, almost-hairless body features wrinkly, gray skin; a long, coarse mane along its neck and back; and a long, tasseled tail.

Among the warthog’s most noticeable characteristics are the four large tusks protruding from the sides of its snout. The two upper canine teeth curve up and over the snout while the sharp lower canines are short and straight. The warthog also sports protruding facial warts which give the species its name.

Found primarily in the savannah woodland and grasslands of sub-Saharan Africa, the warthog is threatened by drought and hunting, which could result in localized extinctions in the future.

The Woodward Spine was the brainchild of Michael Fossano and Jeffrey Buck, two Royal Oak, Mich. natives who met nearly 10 years ago while attending the now-defunct George A. Dondero High School. It seemed fitting for the two Wayne State University alums to craft an outlet to help continually refine their writing skills, while also serving as a trusted source of information for the metro Detroit community. The Woodward Spine aims to inform its readers about relevant news and events through creative and informative posts not only by Mike and Jeff, but other upstanding citizens as well who are driven and proficient in these core areas: news, opinion, entertainment, history, sports and development. The Woodward Spine serves the tri-county metro Detroit area, however concentrating mainly on the communities that lie along the Woodward corridor.
View all posts by The Woodward Spine →
This entry was posted in Detroit, Things To Do and tagged animals, detroit, detroit zoo, education, fun summer, kids, learning, Royal Oak, warthogs, zoo. Bookmark the permalink.