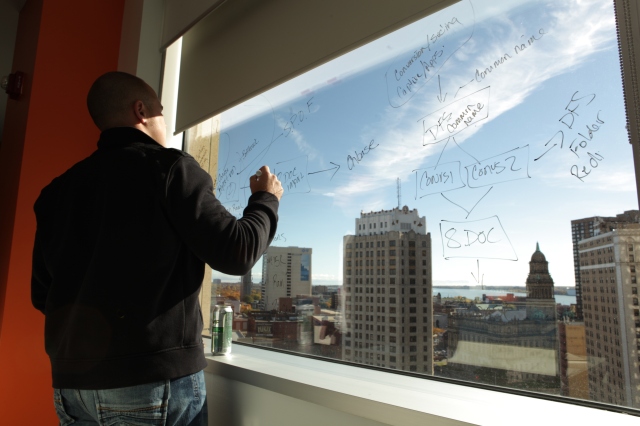 DETROIT – Quicken Loans, the nation’s largest online mortgage lender, today was named a top-five place to work nationwide in FORTUNE Magazine’s annual ranking of the “100 Best Companies to Work For.” This marks the 11th consecutive year Detroit-based Quicken Loans has ranked in the top-30 of FORTUNE’s benchmark workplace culture study.

Quicken Loans’ culture goes far beyond its storied bright colored offices and fun, collaborative work environment. The company’s team members consistently express an appreciation for the inclusive and creative culture, nurtured by leaders who encourage them to innovate without fear of failure along the way.

“It’s incredible to see what’s possible when you hire great people, empower them and set them loose to innovate and create,” said Quicken Loans Chief Executive Officer Bill Emerson. “It is an absolute honor to work alongside our more than 10,000 team members who bring their passion and energy to the office each and every day.”

In 2013, Quicken Loans continued its explosive growth, closing a company record $80 billion in home loan volume, becoming the third largest overall lender in the country. The company also grew its loan servicing capabilities to become the 11th largest mortgage servicer in the nation, with more than $138 billion in home loans in its portfolio.

Quicken Loans, for the fourth consecutive year, was named by J.D. Power as the highest in customer satisfaction among all home loan lenders in America.

While busy setting records for its client service and growth, Quicken Loans invested substantially in its hometown of Detroit, finalizing the move of all Michigan-based team members to the city and playing a large role in the city’s ongoing revitalization. Team members set their own record in the community, volunteering more than 36,000 hours of their time at hundreds of non-profit organizations.

“Of everything we accomplished last year, what makes me the most proud is that our team still took time to lend a hand to those in need in the communities where we live, work and play. It is that passion for doing the right thing and caring about others that lays the groundwork for our success,” Emerson added.

According to FORTUNE’s survey, 98 percent of Quicken Loans team members said they feel good about how the company gives back to the community. Additionally, 96 percent of team members say they have the opportunity to have fun at work.

FORTUNE Magazine partners with the Great Place to Work Institute to develop a comprehensive team member survey that examines team member satisfaction through questions about compensation, empowerment, and training to rank the companies. The survey is randomly distributed to team members, with the results of the survey accounting for two-thirds of the overall company score. The remaining company score is determined through the Great Place to Work Institute’s Culture Audit, a series of questions and surveys on benefits, hiring and recognition.

The Woodward Spine was the brainchild of Michael Fossano and Jeffrey Buck, two Royal Oak, Mich. natives who met nearly 10 years ago while attending the now-defunct George A. Dondero High School. It seemed fitting for the two Wayne State University alums to craft an outlet to help continually refine their writing skills, while also serving as a trusted source of information for the metro Detroit community. The Woodward Spine aims to inform its readers about relevant news and events through creative and informative posts not only by Mike and Jeff, but other upstanding citizens as well who are driven and proficient in these core areas: news, opinion, entertainment, history, sports and development. The Woodward Spine serves the tri-county metro Detroit area, however concentrating mainly on the communities that lie along the Woodward corridor.
View all posts by The Woodward Spine →
This entry was posted in Detroit and tagged america, awards, best, creative, detroit, downtown, fortune, gilbert, jobs, Michigan, quicken loans, top 5, work. Bookmark the permalink.