Detroit in 1942 was much different for many people but especially for African Americans. A photo in a series that depicted the life and conditions of those families during that period.

Take a look at the photograph entitled “Mirror, Mirror: 1942“: 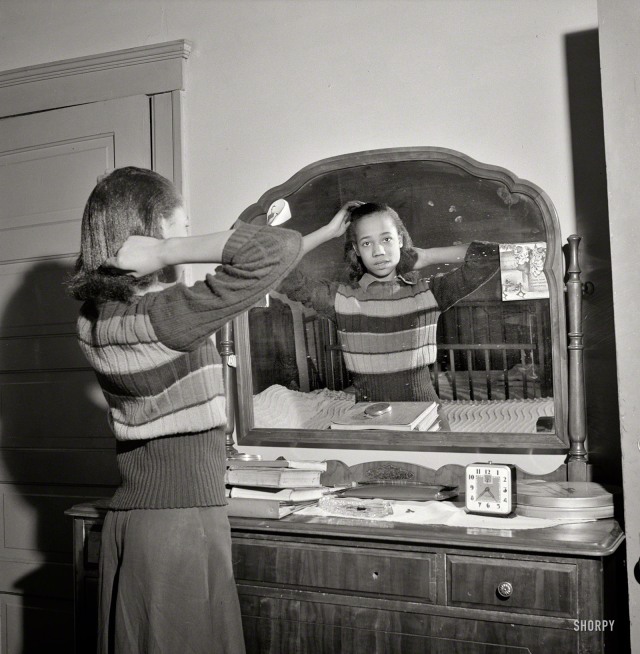 February 1942. “Detroit, Michigan. Negro girl putting up her hair.” One in a series by Arthur Siegel documenting the life of a “typical Negro worker’s family” and the “conditions under which families originally lived before moving to the Sojourner Truth housing project.” Office of War Information.

I'm currently a Project Manager at Cypress Partners, LLC in Bloomfield Hills, Mich. I graduated from Wayne State University in 2008 with a B.A. in Journalism. Looking to broaden my view of the world, I spent a semester abroad studying at the University of Salford, a Greater Manchester University in England. I enjoy doing an array of activities, including following Detroit sports teams, SCUBA diving, traveling, reading, playing tennis, hand-written letters and going to the movies. I am the co-founder of the Woodward Spine, a blog about Detroit and its surrounding communities. The Woodward Spine aims to inform its readers about relevant news and events through creative and informative posts in these core areas: news, opinion, entertainment, history, sports and development. The Woodward Spine serves the tri-county metro Detroit area, concentrating mainly on the communities that lie along the Woodward corridor.
View all posts by Jeffrey S. Buck →
This entry was posted in Detroit, Shorpy Saturday and tagged 1942, african americans, detroit, detroit publishing company, family, housing, living, Michigan, projects, shorpy, war. Bookmark the permalink.