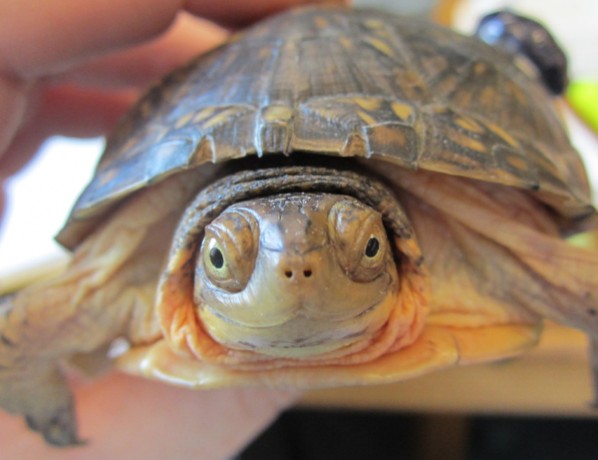 ROYAL OAK, Mich. – Maybe they just need to come out of their shells a bit.

Blanding’s turtles, native to the Midwest, can live to be 50-60 years old. Their hatchlings, however, are often preyed upon, primarily by raccoons.

As a continuation of an already three-year conservation effort focused on Blanding’s turtles, researchers at the Detroit Zoological Society (DZS)’s Center for Zoo Animal Welfare (CZAW) have embarked on a new plan to study the hatchlings’ personalities to determine how the various traits relate to survivability.

“While reintroduction programs are typically concerned with helping to preserve an entire species, sometimes this comes at the expense of individual animals that may not survive,” said Jeff Jundt, DZS Curator of Reptiles. “It is for this reason that researchers have begun to delve further into the factors that may predict success in reintroduction programs. It is believed that some behavioral factors such as locomotion, ability to acquire food, and personality may impact individual survival.”

By investigating the role of personality in individual survival, success rates for reintegration programs for the Blanding’s turtle could improve by maximizing the individual well-being of this ecologically important, but often underappreciated, species.

The study is a continuation of efforts by the DZS in partnership with the U. S. Fish and Wildlife Service at the Shiawassee National Wildlife Refuge and the University of Michigan-Flint to protect the nests of Blanding’s turtles, a project which began three years ago.

A head start program, aimed at helping the species thrive in a protected environment until they were less susceptible to predation, led to the release of 63 turtles back into their native habitat in 2011. The following year, 69 animals were released, with transmitters affixed to the shells of 12 turtles in order to determine habitat use, dispersion and survivability following their release. In 2013, 27 turtles were released and, so far in 2014, 24 turtles with transmitters have been released, with an additional 28 to be released at the end of August.

The Blanding’s turtle (Emydoidea blandingii) has a black, speckled, high-domed shell that reaches 9-11 inches in length. Its underside and lower jaw are bright yellow, making the reptile easy to recognize. The shape of its jawline causes the turtle to appear as if it is smiling.

The Woodward Spine was the brainchild of Michael Fossano and Jeffrey Buck, two Royal Oak, Mich. natives who met nearly 10 years ago while attending the now-defunct George A. Dondero High School. It seemed fitting for the two Wayne State University alums to craft an outlet to help continually refine their writing skills, while also serving as a trusted source of information for the metro Detroit community. The Woodward Spine aims to inform its readers about relevant news and events through creative and informative posts not only by Mike and Jeff, but other upstanding citizens as well who are driven and proficient in these core areas: news, opinion, entertainment, history, sports and development. The Woodward Spine serves the tri-county metro Detroit area, however concentrating mainly on the communities that lie along the Woodward corridor.
View all posts by The Woodward Spine →
This entry was posted in Detroit, Things To Do and tagged animals, detroit, environment, family, flint, friendly, hatchlings, huntington woods, learn, Michigan, midwest, pets, reptiles, research, Royal Oak, study, turtles, university of michigan, zoo. Bookmark the permalink.